Recently we’ve seen a slew of negative month-over-month price growth data for many agricultural commodities. The 12-month changes are all still positive – and some of them very large – but supply and demand factors have begun to ease price pressures. 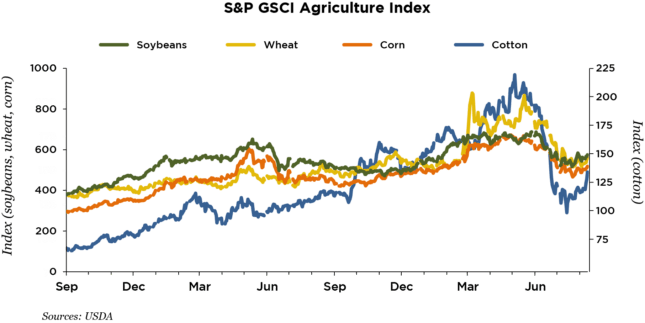 In late July, a grain ship left the port of Odesa in Ukraine for the first time since Russia invaded in February. Since then, more ships have left carrying corn, soybeans, sunflower oil and sunflower meal. The shipments are the result of an agreement brokered by Turkey and the United Nations last month after warnings that a continued lack of shipments due to the war could lead to food shortages and, in some places, famine. With three ports now open, Ukraine’s export capacity is estimated to be roughly three million tons per month, which is half of the normal capacity.

The climate, tax, and healthcare bill passed through the Senate last week and includes $20 billion toward the USDA’s voluntary land stewardship programs. The money, which is to be divided by various programs, is meant to incentivize the reduction of greenhouse gas emissions and to increase climate resiliency.

Zippy Duval, president of the American Farm Bureau Federation, expressed concerns about the proposed increase in taxes and encouraged lawmakers to focus on addressing record-high input costs and economic growth, among other things. Conversely, the National Farmers Union expressed support for the bill and its additional spending for rural communities.