Planting and price projections for the 2022 growing season

The 2022 planting season is nearly here, and the projections for this spring reflect higher prices for several crops (the index of prices received by farmers closed 2021 at its second highest level ever) as well as difficulty keeping up with strong international demand due to port bottlenecks (i.e., lower ag exports). While a falloff in exports for most ag products is expected for 2022, last year was a record-setting year for ag exports and the current projections for 2022 are still strong. 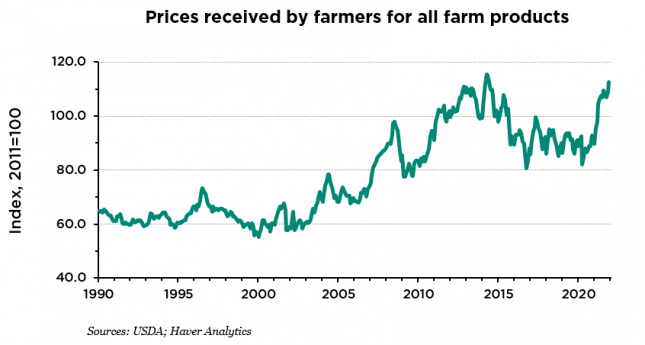 With the U.S. currently experiencing a shortage of more than 80,000 truckers, North Dakota governor Doug Burgum signed an emergency order in late January aimed at recruiting truckers specifically for delivering milk. The order waives the hours-of-service requirement for truckers on top of North Dakota’s milk marketing board waiving enforcement of certain licensing requirements through the end of March. The order is a response to one of North Dakota’s major milk distributors going out of business, which put more than 50 school districts at risk of losing access to milk. Gov. Burgum described the order as a temporary fix while officials decide how to “get the government out of the way” in the process of recruiting more truck drivers

In Texas, Hays and Caldwell Counties have gone a step further by offering bounties for killed wild pigs. Each county will be offering five dollars per killed pig as they attempt to get their wild pig populations under control. Wild pigs are increasingly problematic to Texas wildlife and agriculture and are present in 253 of Texas’ 254 counties.

Chicken wings are a staple at Super Bowl parties, and although they are pricier this year than they have been in the past (wing prices are up by 30 cents per pound versus 2021) it is still expected that Americans matched 2021’s record chicken wing consumption during last weekend’s Super Bowl. According to the National Chicken Council (NCC), chicken wing consumption was once again expected to reach 1.42 billion wings during Super Bowl LVI, equal to the estimated record number consumed for Super Bowl LV.

Help clients start the year strong with these financial resolutions

Talk to your clients about rebalancing their portfolio, purchasing life insurance, protecting their assets and more.